I've moved because a new perspective deserves a new beginning. SliModSoc happened during a crisis of faith, The Folk Metaphysic is what is happening now that I am emerging from said crisis. Happy trails peeps...
Posted by Loren at 1:08 PM 5 comments:

Is Satan really the bad guy? 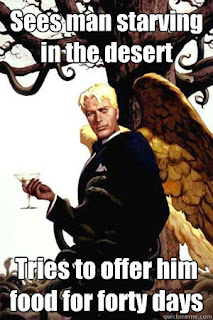 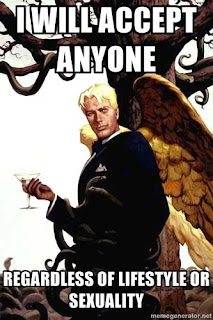 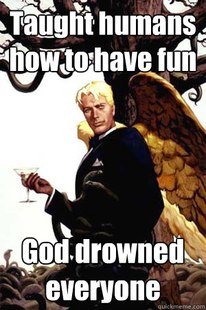 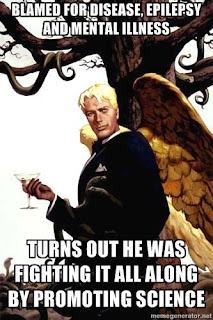 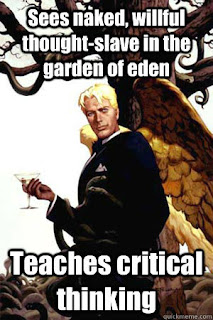 i am loren hopkins. loren means crowned one. my dad told me that hopkins means son of the goblin (and later revised this to: son of the cobbler, which is far less interesting). when i first watched labyrinth, i decided, thanks to my name, that i would be the goblin king, not because of my unhealthy obsession with jennifer connelly, or my cannibalistic fetish for baby flesh, but mainly because goblins are vile and foul creatures and king's are noble and elevated (or at least pretend to be) and david bowie has very tight pants. i like the juxtaposition of incongruent things.

i am a burly man and a philosopher, a mystic atheist, a master of ambivalence, paradox and contradiction. i am loren hopkins and i'm back.

there are more worlds than we know in the world, let alone in the universe. for starters there is my inner and outer life. i went to the gold coast 600 hundred this week and watched half the race on tv, the track wrapped around my apartment complex, but there's something comforting about peering into a little black box. everything is mediated. experience is always filtered, the outer world is shaped by my inner life. i try to use words to set my conscious free, but perhaps a new approach is in order.

i am a collection of several incomplete jigsaw puzzles, the pieces don't quite fit together properly. someone get me some dmt.

OK, so I wrote up my little contract which I'll post one of these days when I get a scanner (or maybe I'll just snap a photo of it with my iPhone). Part of what is involved is me having a fight. I've never been in a fight before and honestly "how much can you possibly know about yourself if you've never been in a fight? ... It's only after we've lost everything [like consciousness for instance?], that we're free to do anything." (I love Fight Club, but I've said too much already). Of course my fighting will take place within a cage or ring, sanctioned by the appropriate authorities and not in some dingy underground cult of violence. One question that I'd like to answer is why there are even legally permissible forms of violence at all, especially at the level of brutality that boxing or MMA allow (and I'd also like to find out why I'm a willing participant. Am I insane? I mean, I'm a pacifist except in the cases of self-defense or fighting for millions of dollars).

I'm just doing my part for posterity in a way. How many slacker/nerds have ever traded blows with a meathead and lived to write the tale (at least onc that I can think of, can't remember the name of the book right now. Tiger something?). This'll be a peculiar type of writing, history, meets travel writing, meets memoir, meets sociology and maybe a little philosophy for good measure, on a blog. Why is violence such a major part of the human condition? So many questions to wade through. It's a cruel universe out there. The search begins in earnest, one punch at a time. Happy trails peeps...
Posted by Loren at 10:25 PM 1 comment:

Two days ago I read this article on Sacrifice via The Art of Manliness website. I was Flabbergasted! Befuddled! If a 6'2 Mormon whiteboy, with the athleticism of an octogenerian, can make the NBA, then all bets are off (I wasn't watching basketball when Danny Ainge was making noise with the Boston Celtics, so this feat to me seems unprecedented). It's now official: anything's possible. Go Jimmer!

James Jimmer Freddette with the help of his brother wrote up this contract, when he was but a wee lad... 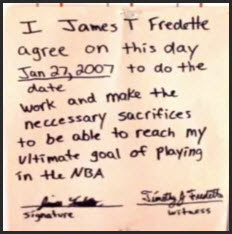 Jimmer paid his dues, which took four words for me to say and years to achieve. Now he'll play for the Sacramento Kings next season (if the lockout between players and management ever ends).

Success has a price. The cost of admission is Sacrifice. This has got me thinking. What am I willing to give up to live how I want. There are too many things to name here. What it comes down to is putting priorities first. A seemingly simple yet deceptively difficult thing to accomplish. Suffice it to say today I wrote up my own contract today. It's only a matter of time now ladies and gents. I'll keep you posted.
Posted by Loren at 6:00 PM 1 comment:

being an apologist means never having to say you're sorry

Let me begin, in the appropriate manner, which is to say that I will sweeten up my intended targets before I give them their medicine. It's only fair. On reflection, I have arrived at this conclusion through no small effort on my part. It is a bitter pill to swallow, and I may require some of that sweetness that I am so generously doling out as a chaser, but here it is: apologists are like me (and other disaffected for intellectual reasons x-mos). We are two sides of the same coin, both willing to grapple with difficult questions, and for this I applaud in their general direction. However, we often, and by often I mean always, tend to reach very different conclusions.
Two of these disagreements unfailingly propel me into a rabid inextinguishable rage. One of which I will share with you today (I told you I was generous).
It's really quite simple. I don't even need a fully fledged syllogism to explain it (maybe just a tautology). One premise will do...
(1) The prophet and leaders of the church are fallible.
(2) Therefore: They make mistakes.
(1) Most Mormons would agree with this statement in principle, but the practice of it sometimes varies. This is partly because there are a cacophony of quotes that discourage members from criticizing the prophet and his cronies at all (One example: "It is wrong to criticize leaders of the church, even if that criticism is true" - Dallin H. Oaks. Don't get me wrong, I can think of a time when God's chosen people reaped the rewards of certain individuals unquestioningly going along with what their leaders said. Oh yeah, it was called The Holocaust). This creates an environment where their every word and deed are somehow beyond reproach. However, the premise stands on its own merits, those primarily being its appeal to common sense. I don't think anyone would seriously argue differently.
(2) It seems an obvious conclusion. This is were I part ways with apologists. If you were to peruse any website dedicated to defending the faith you will find that any and all criticisms are addressed in a way that ultimately suggests that the church and its leaders are not at fault. The contradiction here is that if the leaders do in actuality make mistakes then sometimes there is no valid reason why the leaders made the choices that they did. To paraphrase Freud: "sometimes a cock-up is just a cock-up." Certain hot button issues like polygamy, blacks and the priesthood et al. are sometimes justified by intimating that the leader in question who perhaps made a questionable statement was speaking as a man and not a prophet. Do I really need to go into how this is merely a miserably convenient cop out?
Here's an idea. Fallibility of the leadership is built into the religion, therefore it isn't necessary to try and justify every single stance, and utterance that has ever been made or taken. Especially ones that are reprehensible in hindsight and tend to defy any reasonable explanation. Hint: If your answer to a query begins with "He was speaking as a man..." or "It's not pertinent to our salvation" (in any of their guises) or you feel compelled to blame or criticize the questioner for particulars on their part that you find unsavory then you probably need to reconsider your conclusion. It's difficult to admit that you don't know something or that worse yet, perhaps you might be wrong, but I would find it utterly refreshing if just once when I logged onto one of these sites that they did just that. Mistakes were made, it's OK, it happens to the best of us. Hey, I thought the church was true for about 28 years.
Posted by Loren at 8:39 PM 1 comment:

What this month taught me...

Perhaps semi-inspired by this TED talk, and definitely by this Testosterone Nation article, this month I decided to embark on a daily regimen (missed 3 days so far, oops) of heavy squating. Nothing gets me all burly-manesque like a solid session of Hemorrhoid inducing weights. I am one of those bizarre people that is addicted to moving ponderous amounts of iron just for fun. Can't really explain, I just do it.
Here's the thing though, too much of a good thing can be bad for you. If you walk into the gym and are significantly weaker than the previous day, and/or feel like bursting into tears for no apparent reason, then it's time to back off slightly. Both my knees are on the verge of exploding, my left hip flexor has been strained since day 3; too many arse to grass squats (not me in the video). I Need to do some box/power-lifting squats, hit the posterior chain, and balance things out. "Moderation in all things, except moderation itself." Hammies, your time has come.
Posted by Loren at 9:27 PM 3 comments:

Loren
I am a work of fiction. Provocateur, philanthropist, revolutionary, anarchist, boring asshole